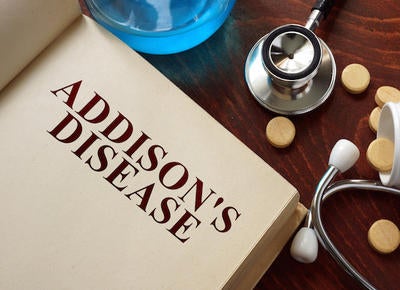 If you’ve done any research into stress relief you’ve likely come across information about cortisol, which is often referred to as the “stress hormone.” While too much cortisol is detrimental to one’s health, everyone does need a balanced dose of it. Addison’s disease is characterized by low cortisol that is usually accompanied by low aldosterone, a hormone that regulates the electrolyte and water balance of the body. While humans may be afflicted by this condition, canines and (more rarely) felines may also get Addison’s disease, which is also known as hypoadrenocorticism. The condition is uncommon, and it can be life threatening but it doesn’t have to be! If you know the signs and symptoms of Addison’s disease, and more importantly when to take your pet to the vet, you may save their life and get them an excellent prognosis, even if they get an Addison’s diagnosis.

The adrenal glands, located next to the kidneys, are what is affected by Addison’s disease. The small, paired glands each consist of an outer cortex and an inner medulla. The glands produce several substances which regulate a variety of body functions and are necessary to sustain life. Among those substances are cortisol and aldosterone. Cortisol helps regulate blood glucose, metabolism, and blood pressure. Aldosterone manages sodium and potassium levels and is key in blood pressure regulation.

Addison’s disease has numerous causes, among them:

Symptoms of Addison’s disease are usually vague and are similar to the symptoms seen in pets with more common medical disorders, such as chronic gastroenteritis or renal diseases. The afflicted pet may experience vomiting, weight loss, diarrhea, increased thirst, and increased urination. Intermittent shaking episodes are also indicative of Addison’s disease. If you notice these symptoms, especially if they are occurring together, be sure to bring your furry family member in to NOVA Pets Health Center. Even if the diagnosis isn’t Addison’s, your pet is undoubtedly ill. Ultimately, what you want to avoid is known as an Addisonian crisis. This often involves the previous symptoms as well as sudden, extreme weakness or your pet may even collapse. An Addisonian crisis is a medical emergency because it could send your pet into deadly shock and you must get your pet to a veterinarian as quickly as possible.

Once a diagnosis of Addison’s disease has been made, most pets can be successfully treated with oral medications, without changes to diet or activity level. It will be necessary to monitor your pet’s progress carefully, particularly at the start of treatment. Occasional hospitalization for monitoring and follow-up testing may also be necessary. Lifelong replacement of both the glucocorticoids (cortisol) and mineralocorticoids (aldosterone) may be required to keep your pet healthy. The dosages may need to be increased during periods of stress, such as during periods of travel or boarding. Still, your pet can have a happily ever , even after an Addison’s disease. NOVA Pets would be honored to help you maintain your pet’s wellness, before or after an Addison’s diagnosis. If you have questions or would like to set up an appointment don’t hesitate to call us at (703) 378-9791!