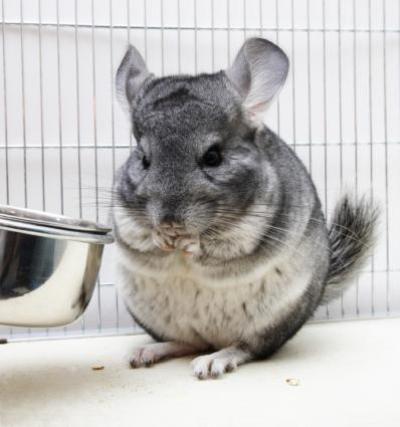 If you’re looking for a fun-size furball, the Chinchilla might be the right pet for you! Chinchillas originated in Chile and Peru. Many of the ones kept as pets in the United States today are descents of those brought over by an American mining engineer in the 1920s. At that time, they were a highly-endangered species because their coat was highly valued worldwide. Certain species of Chinchilla, unfortunately, still face that threat during present times. As many of us know, the Chinchilla is worth so much more than just their fur!

Chinchillas are highly sensitive, intelligent, and energetic creatures who love to play with their human pet parents. They enjoy the company of other Chinchillas as well so pet professionals often advise getting them in same-sex pairs. Chinchillas can be rather shy when you first interact with them but they’ll undoubtedly come out of their shells in no time! Do take caution if you already have animals in your home, especially those who might consider the Chinchilla as their prey, such as cats or some dogs.

Chinchillas are mostly-herbivorous rodents and need to be supplied with both pellet feed and hay, which are available at local pet stores. Some dried fruits may also be fed on occasion as well as certain vegetables, such as carrots. As with other rodents, Chinchillas also need access to fresh water in their cages.

One of the greatest concerns for Chinchilla pet parents is temperature control and this is because of the Chinchilla’s thick fur coat. In the wild, Chinchillas were in rough and rugged conditions on the low end of the thermometer. Air conditioning is an absolute must for Virginians hoping to bring Chinchillas into their homes because it’s not just heat that can harm these playful pals, but the humidity too. Chinchillas are mostly active during the twilight hours so where they are kept during the day to sleep is very important.

There are a few things to keep in mind for a Chinchilla habitat or cage. First and foremost, they love to burrow and hide, so their cage must be large enough to offer multiple hiding spots and should provide a variety of them. Additionally, the cage must have a solid floor to prevent possible foot injuries that may be sustained from wire-floor cages. Bedding will help to make the cage a real home for the Chinchilla, and there are a variety of options available. Texture is less of a concern than material—avoid cedar and pine.

Cleanliness is something your Chinchilla will handle on their own; all you need to do is purchase volcanic ash for them so that they can take dust baths. Chinchilla fur should never get wet and should it become wet must be dried immediately. The kind of “hygiene” you can help with the most has more to do with growth. Because Chinchilla teeth continue to grow throughout their entire lives Chinchillas need ample toys to chew on! The hay that they are fed contributes to their dental health as well. Don’t forget about nail trims as well!

The information above will largely help you keep your Chinchilla healthy given that common issues are mostly preventable. For instance, if a low dust bedding is chosen for a Chinchilla’s cage then it’s less likely that eye irritation will occur. If the Chinchilla’s diet is balanced, gastrointestinal issues will be minimized. Still, mites and ringworm might afflict a Chinchilla if they are somehow exposed. Luckily, NOVA Pets welcomes exotics at our facility and can help you when you are ready to add your new Chinchilla to your household.

If you’re looking for a bite-size fur baby well-suited for your smaller home, consult local Chinchilla rescues such as Whimsy’s Menagerie or look up reputable local breeders.