All About Munchkin Cats 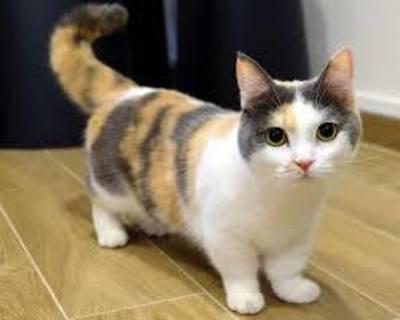 In recent years the popularity of “Munchkin Cats” has spiked sharply, and there’s no question as to why: their diminutive stature appeals to us and we can’t help but think that they’re cute as a button! Those of us who also have an affinity for canines might say the Munchkin Cat is a feline version of a Corgi or Dachshund because of their build. But make no mistake, these stubby-legged sweethearts are cats through and through, and you can’t lose when you bring a feline friend into your home. According to VetStreet the Munchkin Cat’s appearance came from a natural genetic mutation, although deliberate breeding is now common. Munchkins are a newer breed and whether or not you knew such an adorable animal existed we’re happy to share more about them in the paragraphs that follow.

The temperament of the Munchkin Cat is often described as playful and even extroverted. They may be small as cats go, rarely getting larger than 10 pounds, but they’ve got personalities to match their much-larger peers. One of their more amusing behaviors is to collect shiny objects, which has garnered them the nickname of “Magpies” because of the (highly-contested) idea that birds by that name are prone to such thievery. Speaking of other species, those of us with multi-species households are relieved to know that Munchkin Cats are known for getting on well with dogs! Petfinder also rates them as highly child friendly. To be brief: Munchkins are just as agreeable as they are adorable. That said, always try to meet your potential new furbaby and spend time with them prior to adoption or purchase. Additionally, you’ll want to ensure that if you buy from a breeder that the individual is responsible and has thoroughly tested the breeding cats for illnesses.

Apart from their clearly distinguishing feature, short legs, Munchkin Cats aren’t very different from other cats physically. They may have short or long hair, have various color patterns, and so far appear to be relatively healthy. That said, recognition of Munchkin Cats and their very breeding remains controversial because of anxiety about health issues that may not yet have been identified as particularly troublesome for the breed, consequences of inheriting two copies of the gene giving the cats short legs while still in the embryo stage, and more.

If you’re interested in having a Munchkin Cat we would encourage you to invest in NOVA Pet’s wellness plans and get more frequent examinations for your furry family member than you would with another breed just in case arthritis, bone disorders, or chronic pain do indeed become an issue. Be sure to call NOVA Pets at (703) 378-9791 to make an appointment for an initial examination, whether your Munchkin is new to your home or you’re looking to change vets!