The Dangers of Delectables 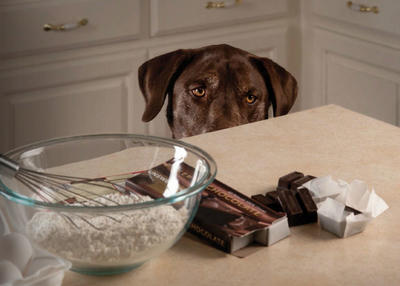 With Valentine’s Day approaching, we’re sure to enjoy our leftover chocolates and we hope you are too. But, did you know that chocolate is toxic to dogs? While cats will usually leave the chocolate for their human companions, dogs are less picky. Chocolate ingestion causes serious illness in dogs and can even lead to death. We all want to keep our cuddly cupids safe and healthy, so below we’ll tell you all about how chocolate affects dogs, symptoms of illness caused by chocolate ingestion to watch out for, and why some dog treats appear to contain chocolate!

What is it about chocolate that makes it dangerous for dogs? Chocolate contains an alkaloid called theobromine. Theobromine is similar to caffeine and is used medicinally as a diuretic, heart stimulant, blood vessel dilator, and a muscle relaxant. Theobromine begins to have harmful effects on dogs in doses of about 50 milligrams (mg) per pound, and death is usually caused by twice that amount: 100 mg per pound. For reference, cooking or baking chocolates, as well as high-quality dark chocolates, contain between 15-20 mg of theobromine per gram. Common milk chocolates, on the other hand, contain only about 1.5 mg per gram of theobromine. This means that a small dog, weighing five pounds, would only have to eat two ounces of baking chocolate or fifteen ounces of milk chocolate to potentially show signs of poisoning. A larger dog weighing fifty pounds would have to eat about twenty ounces of baking or dark chocolate to become ill.

When it comes to chocolate poisoning, prevention is the best defense. It’s important to store your chocolates in a secure container that is out of your furry family member’s reach. Should an accident occur, however, you’ll likely be tipped off by symptoms such as vomiting, diarrhea, increased thirst, panting, restlessness, muscle spasms, and even seizures. With that said, clinical signs of chocolate poisoning can take up to twelve hours to develop. Once theobromine is absorbed into the body, it may remain there for up to twenty-four hours, causing damage the whole time. For this reason, it’s imperative that you seek medical attention for your dog the moment you come to suspect chocolate ingestion. The sooner theobromine is removed from your pet’s body or they’re stabilized, the better the prognosis.

When you bring your four-legged friend to us with the suspicion that they’ve eaten chocolate, we can take several different actions to ensure their well-being. Firstly, treatment is based on the amount and type of chocolate eaten, so in less severe cases your dog may be treated with medication to induce vomiting. If several hours have passed since the suspected ingestion, activated charcoal may be administered to block the absorption of theobromine in the stomach and small intestine. Activated charcoal may be administered every four hours for the first 24-36 hours of treatment to reduce the continued re-absorption and re-circulation of theobromine. Additionally, we may provide supportive treatments such as intravenous fluid therapy to help dilute and promote excretion of the toxin. Whether your dog is treated and sent home or kept overnight, be aware that any dog who has ingested chocolate should be closely monitored for at least 24 for any signs of irregular heart rhythm.

By now you may have thought back to some recent pet store errands and recalled treats like “chocolate chip cookies” made for dogs! What’s that about? Well, many gourmet dog treats use carob as a chocolate substitute. Carob looks similar to chocolate and the two are often confused. Carob is popular in some human sweets as well and if your dog gets a hold of a carob chip, there’s no cause for concern.

If you have questions about chocolate ingestion or toxicity in dogs, or suspect that your pet has eaten chocolate in any amount, do not hesitate to call NOVA Pets at (703) 378-9791 to consult next steps for treatment with us or set up an appointment. Also, remember that our Wellness Plans include discounts at all tiers and comprehensive diagnostic tests in the top two tiers!